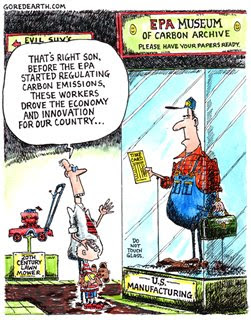 The war on carbon is an ill-disguised war on humanity, a war on human freedom. Carbon and carbon emissions are simply a proxy for human activity. This whole movement to demonize carbon is driven

by a world-denying, man-hating worldview. It is time to rip away the mask and expose the movement whose real aim is to put the human race in chains to a system that controls every aspect of human

existence. It is time to stand up and say, “You take your jackboots off my carbon and off my life.”

It is heartening to see that more and more scientists are waking up to the junk science of man-made global warming alarmism and that they are now coming out of the woodwork to say so. The movement to shut down our energy sources by a beat-up against CO2, if successful, would turn off the lights of civilization. It is fitting that the symbolism of the recent Earth Hour was darkness rather than light.

There has never been more than a small coterie of pseudo-science activists and social engineers driving this global warming alarmism cart. They have been remarkably successful in closing down the debate and silencing opposition by their big lie about their enjoying an overwhelming scientific consensus. They have intimidated a lot of scientists with the fear of losing academic funding if they should open their mouths with a contrary opinion.

As for the Media that refused to obey their own credo of rigorous investigative journalism, that ducked from asking the hard questions, that forgot they were supposed to be independent journalists instead of advocates for the popular hysteria, its integrity and credibility has been trashed by its own hand. Long live the free spirits of the Internet, the indefatigable bloggers who would not be silenced.

Full essay attached and online at: www.tech-know.eu/uploads/THE_VINDICATION_OF_CARBON.pdf
Robert D. Brinsmead is a Horticulturist and a free-lance Writer.
—