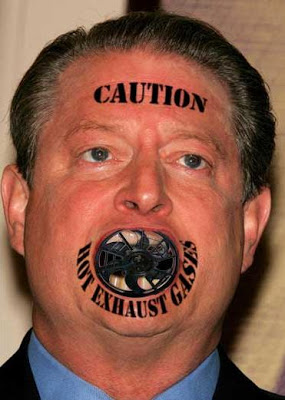 The Daily Bayonet is pleased to present a guest post by Michael Duvinak.

As I read the Wall Street Journal this morning online, I stumbled across an editorial that inspired this article and, at least in a very limited sense, my return to blogging.

Mike Judge, creator of the animated shows Beavis and Butt-Head and King of the Hill, has set his sights on environmentalists in an upcoming series based around families that want to live like their green savior, Al Gore.

Just how difficult can it be to live like a former senator from Tennessee and vice president? Let’s look into the past and see how those who want to live like Gore should behave.

To behave like a Gore, you must think like a Gore. Therefore, you must believe in the benefits of food-based ethanol, even going so far as to cast the tie-breaking vote for its use. You must also, at the same time, ignore any and all reports of skyrocketing food prices across the globe as a result of your actions – even when those in foreign lands are rioting in the streets as food supplies dwindle and prices become unattainable. Death by starvation must not bother you, either. Of course, when those starving are halfway around the globe, it’s not a real drag on your everyday life.

Speaking of starvation, you must also believe that it’s your moral responsibility to curb man-made global warming, even if people die in the process. You must also base your carbon-is-killing-the-planet plan around incentives for reducing carbon and let other countries draw their own conclusions on how to implement these incentives. An Australian doctor proposed carbon taxes on live births but offer carbon credits for contraception and sterilization. Regardless, you must continue to maintain the moral high ground, even if folks in Australia undergo abortions to save themselves from additional carbon taxes.

Personal responsibility shouldn’t be high on your radar, either, if you want to live like Al. While pushing for carbon taxes and cap-and-trade plans to limit carbon “pollution”, you must ignore any financial hardships that have befallen the average citizen during this economic crisis and instead focus on how to make electricity and fuel even more expensive for the consumer. At the same time, you should continue to fly across the globe in your private jet, coordinate Live Earth events to bring global warming to the forefront (while emitting tons of carbon to do so), and use as much electricity as you can in your home. In fact, your home’s electricity usage should increase by ten percent year-over-year, and should be enough to power about 232 American homes each month. It’s all about personal responsibility. Remember that.

You must also like red meat, even though bovine and other livestock produce methane, a gas about 20 times more powerful than carbon dioxide at trapping heat. Ignore any and all calls to become more vegetarian and consume less meat. Surely the planet will die but the devoted followers of the Green One will be saved by the little green hybrid in the sky. Or something.

And the next time you have a speaking engagement, be sure to have your driver leave the limo idling with the air conditioning on for at least 20 minutes prior to your departure. After all, with all of this global warming, you could otherwise break a sweat.

So just remember, if you ask yourselves, “what would Gore do,” follow the directives above. If you’re an independent-thinking individual, continue with your average lifestyle and be happy. Certainly your lack of personal jets, worldwide speaking engagements, congressional tie-breaker votes and questionable moral judgment does more for saving the planet than those who seem most consumed by trying to save it.

3 thoughts on “What Would Al Gore Do?”