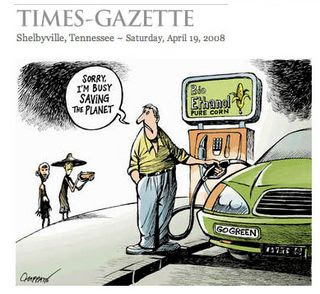 By The Daily Bayonet
Two green groups disagree about the effects of using biofuels in the UK.Friends of the Earth claim that the the Renewable Transport Fuels Obligation (RTFO) has the effect of putting an extra 500,000 vehicles on Britain’s roads. The Renewable Energy Association (REA), a pro-biofuels group, claims that the important thing is that the UK can compete in the sustainable fuels market.The truth of the matter is that the UK has discovered the inconvenient truth that biofuels are a bad idea. The REA is a group of businesses that greenwash their brands under an eco-banner, and they want more cash to subsidize turning food into fuel. These firms are as complicit in the deaths of poor Africans as the frenzied greens that pushed biofuels as a solution to non-existent global warming. Friends of the Earth have always rejected the use of ethanol, they are one of the few eco-groups to have seen the sordid effects it would have on the poor’s food costs. Unfortunately, that’s as nice as I can be to FoE, because they are still anti-nuclear, anti-human hippies. But no-one’s perfect.