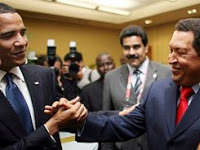 As the months pass by in the Obama administration, some traits are beginning to emerge that inform us in a general way what we’re up against.

To the astonishment of many, it is an administration filled with Marxists. The “Green Jobs” czar Van Jones was exposed as one and resigned. Now it has been revealed that yet another, Mark Lloyd, designated as the “Diversity” czar, holds the Venezuelan dictator, Hugo Chavez, in high esteem, calling his power grab “an incredible revolution.”

Even before these two, it was learned that Carol Browner, the “Environmental” czar, was a highly regarded member of the Commission for a Sustainable World Society, which is part of the Socialist International.

As various members of the Obama administration expressed their views on events and issues, we discover that they hold most Americans in low esteem. David Axelrod, the communications advisor to President Obama, dismissed an estimated 1.8 million Americans who participated in the September 12 protest march saying, “They’re wrong.”

There hasn’t been a comparable event in years, but “They’re wrong.”

Given the polls that all say that the nation’s economy is the number one issue that needs to be fixed, the White House has embarked on two major pieces of legislation guaranteed to wreck it still more. Healthcare “reform” should have the same priority as fixing the nation’s infrastructures of roads, bridges and ports, but instead there has been a non-stop effort to initiate a government takeover one sixth of the nation’s economy. Some people might call that Marxist.

Likewise, the hideous “Cap-and-Trade” bill, a huge tax on the generation and use of all energy has been the other administration priority. If you wanted to reduce America to third-world nation status, just increase the cost of energy while, at the same time, opposing any offshore exploration and extraction of oil and natural gas, and making it nearly impossible to build any coal-fired plants that currently provide just over fifty percent of all electricity.

This brings me to Dr. Steven Chu, the Secretary of Energy, the subject of a September 21 Wall Street Journal article that reported “Dr. Chu said he didn’t think average folks had the know-how or will to change their behavior enough to reduce greenhouse gas emissions.”

There is no reason, zero reason, to reduce greenhouse gas emissions. There is no global warming and, even if there was, carbon dioxide, (CO2) the primary gas over which controls would be imposed, has nothing to do with climate change. Instead, hundreds of years after a warming, it shows up in the atmosphere in somewhat enhanced amounts. And even that is a good thing because CO2 is essential to all life on Earth as plant food.

I daresay the American public are not like teenagers, nor should they be regarded or treated as such, but therein lies the unbearable arrogance of the Obama administration.

The notion that the President of the United States has to be on all five (save Fox) Sunday morning talk shows says that his handlers believe viewers must be overwhelmed with a torrent of lies to accept the administration’s position on healthcare reform. When one anchor noted that an element of the reform package was a hidden tax—an excise tax—that simple truth was brushed aside.

The President’s speech at the United Nations repeated every lie about “climate change” we have been hearing since the 1980s and that repetition is so unpersuasive that “global warming” ranks last among the priorities that Americans have these days. It’s no longer Obama’s “Audacity of Hope”, it is the audacity of his lies that confront all Americans.

The Earth has been cooling since 1998. It is making the global warming liars desperate to get whatever national and international action taken before it becomes even more evident. The fact that the President would address it as justification for any action his administration might take reveals the depths of deception that exist within it.

The kind of arrogance and outright deception Americans are witnessing is increasingly distressing and generating a lot of anger. It’s not going to go away. Hugo Chavez may have fans inside the Obama administration, but beyond the gates of the White House he is known for what he is, a dictator.

To borrow a phrase from a Hollywood film, fasten your safety belts, it’s going to be a bumpy ride.