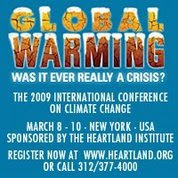 According to California Congressman Tom McClintock, the world’s six billion humans breathe out 2.4 billion tons of carbon dioxide each year. His state has a goal of reducing emissions by 170 million tons of carbon dioxide to meet legislative requirements. Simple mathematics shows if we can just “do away” with 425 million of Earth’s inhabitants, we can help Governor Schwarzenegger meet his bogie. Congressman McClintock was one of 80 presenters at the 2009 International Conference on Climate Change held this week in New York City.

For the 800 scientists and interested parties at the second annual conference sponsored by the Chicago-based Heartland Institute, this was a moot point. Virtually all of the attendees from 40 countries are quite certain that carbon dioxide emissions from any source — natural or as a function of human activities — have very little, if any, effect on global temperatures.

These 800 participants were not a stereotypical group of chanting protesters gathered for a publicity stunt, as seen with the estimated 2,500 mostly student demonstrators — led by chief climate alarmist James Hansen — who participated in a “stand-in” last week under conditions of record-breaking snowfalls and unseasonable low temperatures in an attempt to shut down the coal-fired plant that supplies heating and cooling for the Capitol building and other federal offices. (One might wonder how our legislators would have been able to bear the low temperatures — perhaps by burning hundred dollar bills in their office stoves?)

In contrast, the Heartland Institute’s climate-change summit was forged around a cadre of professional climatologists, atmospheric physicists, and economists who see the effects of a global-warming “hoax” as the death knell for scientific inquiry and the capitalist system of free enterprise. Many, if not most, were hoping that they could lend themselves in a fight for scientific truth and against an egregious global-warming scam. As MIT Professor of Meteorology Richard Lindzen put it: “There is no organized movement [of climate realists] — only many individuals who are appalled at bad science and ‘consensus.'” The Alfred P. Sloan professor lamented, “We are asked to undergo much pain for no gain.” In reference to the number of academic and government scientists who adhere to the global-warming model, Lindzen stated: “Embracing global warming makes every scientist’s and politician’s life easier.”

Australian scientist David Evans elaborated on the clear evidence that there is no connection between the concentration of atmospheric carbon dioxide and the warming trend seen since the end of the “Little Ice Age” that most agree ended in the late 19th century. A former “believer” in human-caused warming and the model builder for the Australian Greenhouse Office, Dr. Evans observed that all computer models — on which predictions of climate catastrophe are based — showed a “hot spot” about 10 kilometers above the equator. When thousands of radiosonde and satellite measurements detected no such fingerprint, he resigned his government position and has become a “climate realist.”

While the New York Times took stabs at climate realists for some internal scientific squabbles, the Chicago-based conference host, Heartland Institute, reminded attendees and the media that predictive climate science is in its infancy and is on the frontier of the unknown. Combing through and modifying models that attempt to multiply hundreds of complex and dynamic inputs necessitates argument. Only “celebrity science” would invoke public fear by boasting “indisputable” facts or unbending “conclusions” about what drives global temperatures and where they are headed.