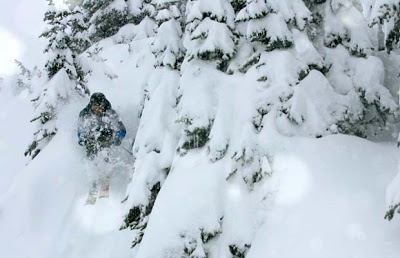 Whistler Blackcomb ski resort is only centimetres away from breaking the record for recorded snowfall in November with 12 days still to go in the month.

The measured snowfall as of Wednesday morning was 362 centimetres, about double the average for the month (148 cm) and just one or two days of snow away from the record of 416 cm.

The Whistler Mountain forecast for Wednesday night and Thursday morning predicted 30 to 40 cm of snow in the alpine with mountaintop winds gusting to 110 km/h.

“We will go over the record, probably by quite a bit,” said Boot. “The mid-mountain area is marked and we sweep and check that daily, especially when there is heavy snow.”

The challenge of the alpine is getting into the alpine,” she said. “We’ve had such blizzard-like conditions that ops crews haven’t physically been able to get there.”

It will take several days to mark boundaries, dig out buried lifts and complete avalanche mitigation after the current cycle of heavy snow eases before the area will be open for guests.

“We restrict access to the alpine during periods of intense snowfall,” said Whistler Mountain avalanche forecaster Anton Horvath. “Heavy accumulations create a bigger volume of snow that could be entrained in an avalanche, so they will be bigger and run farther.”

“Usually we can do that in half a day,” he said. But the balance of the work – marking hazards and boundaries and digging out equipment – will take a couple of days of good weather to complete.

The Whistler Village Gondola, Franz’s chair, Big Red Express and Emerald Express are operational. The Creekside Gondola and Garbanzo Express lift are scheduled to open for this weekend.

Plenty of avid skiers are already getting some early turns in, according to a release from Whistler Blackcomb.

“I’ve skied here for over 15 years and I’ve never seen this much snow so early in a season, it seems like every day’s snowfall is topping the last,” said Stephen Butt, communications coordinator and voice of the Snow Phone for Whistler Blackcomb . “We have already received one third of our average annual snowfall for the entire season and it’s only four days into the season, it’s unbelievable!”