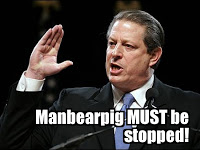 Three months to go until the UN climate summit in Copenhagen. Three months in which we will be repeatedly assured by climate fear promoters such as Al Gore, George Monbiot, Ed Miliband and the risible Ban Ki-moon that this really is absolutely, definitely, totally and irrevocably the very last chance the world’s leaders will have to save the planet from ManBearPig. (Just like they said at Rio and Poznan and all the other “let’s see who can rack up the biggest carbon footprint” global shindigs that eco-campaigners insist on staging, the better to stoke up their self-flagellatory eco-guilt). But, for the global warming deniers among us at least, the panic’s off. Nothing scary or dangerous is going to happen as a result of the Copenhagen summit. It will be a talking shop, abundant with airy platitudes and earnest pieties, but signifying less than ****er all as far as economy-damaging Kyoto-style legislation goes. There will be a political statement of intent. But no binding “agreement”. Here are few reasons why: 1. A bit like one of those mutant pandas I mentioned yesterday, the science has turned viciously against the warmists. Not that it wasn’t against them before. But they have their work seriously cut out if they’re ever going to recover from the speech given at the UN world climate conference in Geneva last week by Professor Mojib Latif of Germany’s Leibniz institute. National Post columnist Lorne Gunter explains: “Latif is one of the leading climate modellers in the world. He is the recipient of several international climate-study prizes and a lead author for the United Nations Intergovernmental Panel on Climate Change (IPCC). He has contributed significantly to the IPCC’s last two five-year reports that have stated unequivocally that man-made greenhouse emissions are causing the planet to warm dangerously.” Yet in Geneva, Latif was forced to admit that all those An-Inconvenient-Truth-style fantasy projections showing global temperatures rising inexorably with C02 levels were wrong. The world is getting cooler, not warming. It will continue to cool, Latif reckons, till 2020 or possibly 2030. By how much he doesn’t know: “The jury is still out.” Which begs the rather obvious question: if the IPCC’s doomsday computer models didn’t predict this cooling phase, how can we be sufficiently confident in their other assertions to start basing major economic and social policy decisions on them? 2. The Chinese. Spin it how they will, President Hu Jintao’s two-minute speech to the UN yesterday was a massive blow to the Warmists. In classic “Tell the foolish gwailo what they want to hear, then carry on doing exactly what we want” Chinese diplomatic style, Hu Jintao promised “determined action”, while refusing to commit his country to any binding targets. The Chinese are not stupid. Their priority number one (and two, and three) is economic growth, not assuaging green lobbyists. 3. People just don’t care about “climate change” that much. Environmental purity is a rich person’s luxury and with the recession most people have other priorities. In the latest Bloomberg poll in the US, for example, just 2 per cent of respondents considered “climate change” the most important issue facing the country. 4. Almost everyone knows deep down that the green lobby’s CO2 targets are pie in the sky. Says Stephen Hayward of the American Competitive Institute in WSJ Online “Carbon dioxide is the result of complete fuel combustion. Apart from still-unproven technologies, there’s no way to remove it from the process. The only way to reduce emissions is to burn less fuel, which means less energy output. “So, to meet the target the climate campaigners have set, the U.S., Europe and Japan will have to replace virtually their entire fossil-fuel energy infrastructure. For the U.S., the 80% target means reducing fossil-fuel greenhouse-gas emissions to a level the nation last experienced in 1910. On a per-capita basis, we’d have to go back to the level of about 1875.” 5. If anyone’s going to push these crazy measures through it’s President Obama. But, as Terence Corcoran sensibly points out, after the rough ride he’s had with his healthcare proposals, Obama is unlikely to want to outrage the US taxpayer still further. “Mr. Obama, already fighting charges his medicare reform will boost taxes on the average American family by $3,000, isn’t likely to simultaneously mount an aggressive push for carbon control legislation that will add another $4,000 a year in taxes.” 6. Right, consider this my serious climate change piece for the week. Now, I can go back to trading childish insults. Phew!Source