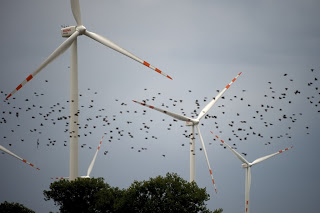 Managers at an aquarium tourist attraction in Devon, England have decided to axe their recently installed wind turbines after discovering the blades minced passing seagulls more efficiently than they produced electricity:

The 15m (50ft) high 6kW turbines at the National Marine Aquarium in Plymouth were installed in 2006 for a £3.6m sustainable energies project. But the Hoe-based attraction has taken them down after several birds died, it said. The aquarium also said they had not produced as much electricity as hoped. Caroline Johnson, of the aquarium, said: “The major problems included where they were positioned. “The eddying effect of the wind meant they weren’t producing as much energy as they potentially could have. “The loss of life of seagulls flying into the turbines was also a problem and, following a gale, the turbines were damaged.”

Witness the trifecta fail of wind power – it kills birds, does not produce much power, and is easily damaged. Alternative energy you can believe in! UPDATE: More trouble for wind power as the Royal Society for the Protection of Birds protests a giant wind farm. heh.