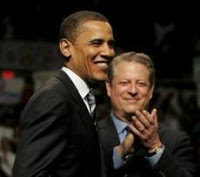 To understand how insane the Cap-and-Trade bill really is you need to know that it based on the belief that carbon dioxide emissions must be reduced to avoid a global warming that is NOT happening.

The American Clean Energy and Security Act is a giant scam involving “carbon credits” to be sold and traded. It is also about billions in taxpayer’s dollars being wasted on wind and solar generation of electricity. If this was a sensible way to produce energy, it would be a dominant producer, but it isn’t. Short of producing electricity by peddling bicycles, it is as inefficient and impractical as possible.

So-called “clean energy” accounts for just over one percent of all the electricity Americans use every day and it exists only because the government subsidizes it by taking your tax dollars and giving them to wind and solar energy producers. Some States require utilities to buy electricity from them.

As for “security”, how much energy security does the United States enjoy if it must import 60% of the oil it uses for transportation and a wide range of products, not the least of which is anything made from plastic?

Real security means drilling and mining right here, right now. There’s plenty of oil in ANWR and offshore. The government forbids access to it. And, where’s there’s oil there’s natural gas as well. As for coal, the U.S. has enough for centuries of affordable electricity, but the environmental organizations have in recent years stopped the building of a hundred coal-fired plants and they brag about it.

A study of the economic impact of the bill by the American Council on Capitol Formation and the National Association of Manufacturers concluded that, if passed, Cap-and-Trade would decrease the Gross Domestic Product of the United States by $2 and $3 trillion by 2030. That’s lost job and lost industrial production.

That’s because Cap-and-Trade would increase the cost of all activities, business and others, by increasing the cost of electricity, the master resource that powers everything in the nation.

Remember, this would be done to limit “greenhouse gas emissions.” This cost would solely be on the backs of Americans while other nations of the world would be free to continue emissions, i.e. providing jobs and producing goods.

Remember, too, that global warming is not occurring. The Earth has been in a cooling cycle for a decade.

This bill is so horrible, Americans can only guess at the consequences of its passage. One thing is certain. It would massively expand government because thousands would have to be hired to administer it.

The nonpartisan Congressional Budget Office estimates it would cost $8 billion over a ten-year period because to operate efficiently it would require the approval of approximately 1,500 new regulations and mandates involving at least 21 federal agencies.

The introduction of Cap-and-Trade would “create the nation’s largest commodity market in which polluters would buy and sell rights to emit carbon dioxide” according to a recent Washington Times article, but it is essential to understand that emitting CO2 is not “pollution.” Carbon dioxide is NOT a pollutant. It is a gas vital to all plant life on Earth. If CO2 were a pollutant, than surely oxygen is as well because oxidation causes rust.

The Cap-and-Trade’s carbon credits could “be a $2 trillion market within five years,” said Bart Chilton, commissioner of the Commodities Futures Trade Commission.

So Cap-and-Trade is NOT about greenhouse gases or global warming. It is about trading credits for the right to GENERATE or USE ENERGY.

How insane is that?

Keep in mind that the present financial crisis is the direct result of the GOVERNMENT getting into the mortgage loan market in the form of Fannie Mae and Freddie Mac, purchasing loans from banking institutions and mortgage lenders who were required by law to make bad loans. Those loans, in turn, were “bundled” and resold as assets, but they were worthless.