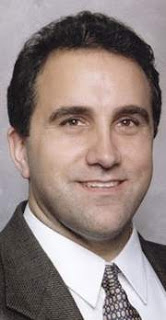 Those convinced that the earth is warming — and that such warming is going to trigger catastrophic disasters — have jumped on to the latest eco-scare that just isn’t backed by science, said Marc Morano (pictured) who runs a Web site called Climate Depot.

Morano was among the speakers Thursday at a one-day conference called “Debunking Climate Change Myths” in Springfield.About 150 attended the conference, presented by a group called “Scientists for Truth.” Attendees included high school students, local politicians and others.On ClimateDepot.com, Morano links to news stories about climate change, as well as providing his own thoughts on the issue.In his speech, he said those who believe in global warming and its dangers also post messages — noting the different sides of the debate may not get along.”But at least they are fighting, they are engaging each other,” he said.While other speakers at the event presented scientific critiques, Morano offered quotes he’s collected from various news sources, politicians and scientists.In 1975, for instance, Newsweek Magazine sounded alarms over climactic change. But the difference was writers were warning of an impending ice age, he said.In the 1980s and the 90s, the popular eco-cause became saving the Amazon Rainforests, a topic Morano made a documentary about in 2000.But, Morano pointed out that even the New York Times reported that for every acre of rain forest being cut, 50 are growing back.Until March, Morano worked for the U.S. Senate Environment and Public Works committee, where he wrote a dissenting report that 700 scientists signed.He said more scientists and others who previously supported a belief in catastrophic climate change are looking at data and challenging conventional wisdom.However, he expressed amazement that more aren’t challenging statements made from supporters like Nobel Prize winning economist Thomas Schelling.According to Morano, Schelling was quoted in The Atlantic as wishing for natural disasters: “I sometimes wish we could have over the next five or 10 years a lot of horrid things happening, you know, like tornados in the Mid west and so forth. That would get people concerned about climate change.”

Morano called characterized such statement as insane. “A man who can’t convince people on the science because the science isn’t there, so he’s now wishing for death, destruction on people through tornados,” he said.Morano predicted that the next “eco-fears” will include a so-called oxygen crisis — a crisis caused by a shrinking supply of oxygen on earth — and a crisis of plastic waste.Laure David, producer of Al Gore’s film on global warming, has been trying to draw attention to the issue of plastic waste, calling it “in some ways more alarming” for humans than global warming, Morano said.The conference was organized by Ron Boyer, who runs a consulting firm. He also sits on the Missouri Air Conservation Commission — though the conference was not connected to the commission.Boyer said he wanted to hold the conference because he was tired of hearing that the debate on climate change is over.”That’s not how science works. Science continues to examine,” said Boyer, who has an undergraduate degree in chemistry.Boyer said future conferences will depend on whether or not the Senate passes the Cap and Trade legislation.”If they do pass it, the debate is over because it will be a done deal,” said Boyer.But, he said, if it doesn’t pass this year there will be a chance to continue debating the science another year.John Lilly, a medical doctor and Willard school board member, said he attended the conference because he wanted to support the scientists who are trying to debunk global warming.”Those who support global warming do it for political reasons rather than actual scientific reasons,” he said.