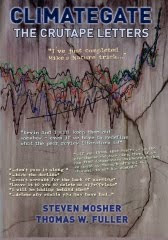 Climategate: The Crutape Letters, written by Steven Mosher and Tom Fuller has just been released:

Mosher, widely known, as a “lukewarmer” is perhaps the one man outside of the Motley CRU, The Hockey Team, and the whistle blower/hacker to receive the file, and recognize the game-changing importance of what he was reading. Mosher’s story was told in vivid detail a couple of days ago by Steve McIntyre. Tom Fuller is a writer and self-described “liberal skeptic”, and was perhaps the first journalist to cover the Climategate story in detail as it was breaking. So, one is a liberal and the other is a “lukewarmer”, so it’s hard to dismiss them out-of-hand as right-wing ideologues. Undoubtedly, Joe Romm and others will smear them anyway – it’s what the alarmists do when they’re desperate. Hat tip: Many thanks to Steven Mosher for the heads up.
Source