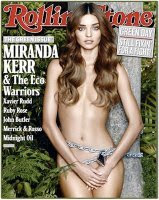 The environmental movement and, in particular, “global warming”, has become a joke. That is always a sign of decline. Unless you’re a comedian, when people start laughing at you it’s never a good thing.

There are often defining moments in the death of a movement and I think I may have spotted one when the Australian July issue of Rolling Stone featured a naked Miranda Kerr on its “Green Issue” cover, chained to a tree while demurely covering her naughty parts to advance the cause of koala bears. Ms. Kerr is described as a “super model” and terribly concerned that there are only 100,000 koalas left. Apparently, “global warming” has something to do with that.

If you have to use nudity to sell your nonsense, you are scrapping bottom; People for the Ethical Treatment of Animals does it all the time.

Back in the U.S. one of the biggest idiots in the U.S. Senate, a former candidate for President, John Kerry, had convened a hearing of the Senate Foreign Relations Committee which predicted that “massive crop devastation, melting glaciers, water shortages, (and) millions of displaced people…will drag the U.S. military into conflict if global climate change goes unchecked.”

Observers may have noticed that Greens no longer refer to “global warming” much anymore as opposed to “climate change.” This is because (a) there is NO global warming and (b) the climate has always been in a process of change over the past 4.5 billion years. If you wanted to ensure that the U.S. military continued to receive billions for defense, claiming that “rising sea levels” will lead to conflicts is a pretty silly way of justifying it, given the threats to peace in the Middle East and elsewhere.

My friend, John Brignell, a British emeritus professor and expert on statistics, maintains a website that features a page devoted to the endless events, trends, and predictions attributed to “global warming.” It is a hoot.

Among the things attributed to “global warming” are acne, a saltier Atlantic Ocean, a decline in the duck and goose population, and, my favorite, why “global warming” is responsible for blizzards and colder winters. http://www.numberwatch.co.uk/warmlist.htm

A recent story on Discovery.com claimed that the dark-colored sheep of the Scottish St. Kilda islands may fall victim to “rising temperatures”, replacing them with lighter ones. The whole of the British Isles has been experiencing colder weather thanks to a cooling cycle that has been occurring for the past ten years. It’s worse than mere twaddle, a story like this is just one of thousands desperately trying to advance and keep alive the absurd “global warming” theory.

Here in the United States, the Science and Public Policy Institute just announced the publication of “Climate Money”, a study by Joanne Nova that reveals the federal government has a near-monopoly on climate science funding and has spent “more than $79 billion of taxpayer’s money since 1989 on policies related to climate change, including science and technology research, administration, propaganda campaigns, foreign aid, and tax breaks.”

The study concludes, understandably, that “Most of this spending was unnecessary.”

The entire bogus “Cap-and-Trade” Act languishing in Congress is about selling “carbon credits.” This is just one degree more disingenuous than selling bottled water when the H2O that comes out of your kitchen faucet is as clean and safe as any you will find from an artesian well. Meanwhile, worldwide, the trading reached $126 billion in 2008.

This is why everything about environmentalism is a scam. Can you think of a single good reason to spend $126 billion for the right to emit carbon dioxide when 97% of it comes from nature? The Earth emits CO2 all the time in the form of volcanic activity, the action of the oceans, storing and releasing it. When you exhale six pounds of it every day?

The desperation you’re seeing and hearing represents Green organizations whose entire agenda is devoted to keeping Americans from having access to any form of energy, destroying our economy, and from the bankers like Goldman Sacks who figure to make billions trading carbon credits.

Americans, many of whom are increasingly out of work, losing their homes and cars, putting off vacations, college for their kids, and any prospect of ever being able to retire are growing tired of this insanity. They have more important things to worry about.