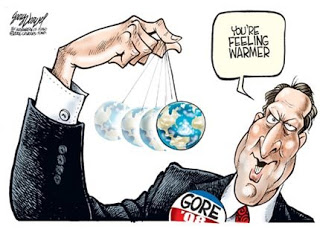 He won an Oscar and a Nobel Peace Prize, but a recent poll suggests the Global Warmingist-in-Chief Al Gore is losing his propaganda war to convince Americans carbon dioxide is destroying the planet.

Talk about your inconvenient truths! This can’t be very good news for a man that has bet his reputation as well as his very fortune on people buying into his junk science. As reported by Rasmussen Reports on Monday, Jan 19, 2009:

Forty-four percent (44%) of U.S. voters now say long-term planetary trends are the cause of global warming and cooling, compared to 41% who blame it on human activity. Seven percent (7%) attribute global warming to some other reason, and nine percent (9%) are unsure in a new Rasmussen Reports national telephone survey.

In April of last year, 47% of Americans blamed human activity versus 34% who viewed long-term planetary trends as the culprit. But the numbers have been moving in the direction of planetary trends since then.Also, according to the latest Pew Research poll, Americans rank the “economy” and “jobs” as the nation’s top two priorities. The “environment” stood 16th out of 20, and “global warming” finished dead last.

In the era of a new president that has bought into Gore’s nonsense hook, line, and sinker, we can only hope Congress is paying attention to how the electorate feels about this issue. Perhaps, just perhaps, people are waking up en masse and actually learning how increasing our CO2 is beneficial to our planet? Maybe the populus isn’t as easily brainwashed as I had feared.