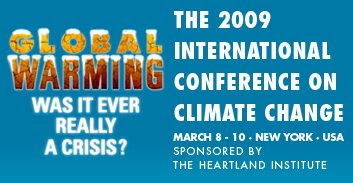 Scientists agree: “Global warming” is not a global crisis.

HERE IS THE TEXT OF THE 2008 DECLARATION:

“We, the scientists and researchers in climate and related fields, economists, policymakers, and business leaders, assembled at Times Square, New York City, participating in the 2008 International Conference on Climate Change,
Resolving that scientific questions should be evaluated solely by the scientific method;
Affirming that global climate has always changed and always will, independent of the actions of humans, and that carbon dioxide (CO2) is not a pollutant but rather a necessity for all life;

Recognising that the causes and extent of recently-observed climatic change are the subject of intense debates in the climate science community and that oft-repeated assertions of a supposed ‘consensus’ among climate experts are false;

Affirming that attempts by governments to legislate costly regulations on industry and individual citizens to encourage CO2 emission reduction will slow development while having no appreciable impact on the future trajectory of global climate change. Such policies will markedly diminish future prosperity and so reduce the ability of societies to adapt to inevitable climate change, thereby increasing, not decreasing human suffering;

Noting that warmer weather is generally less harmful to life on Earth than colder:

That current plans to restrict anthropogenic CO2 emissions are a dangerous misallocation of intellectual capital and resources that should be dedicated to solving humanity’s real and serious problems.

That there is no convincing evidence that CO2 emissions from modern industrial activity has in the past, is now, or will in the future cause catastrophic climate change.

That attempts by governments to inflict taxes and costly regulations on industry and individual citizens with the aim of reducing emissions of CO2 will pointlessly curtail the prosperity of the West and progress of developing nations without affecting climate.

That adaptation as needed is massively more cost-effective than any attempted mitigation, and that a focus on such mitigation will divert the attention and resources of governments away from addressing the real problems of their peoples.

That human-caused climate change is not a global crisis.

That world leaders reject the views expressed by the United Nations Intergovernmental Panel on Climate Change as well as popular, but misguided works such as “An Inconvenient Truth”.
That all taxes, regulations, and other interventions intended to reduce emissions of CO2 be abandoned forthwith.” Agreed at New York, 4 March 2008.

Don’t miss this years conference, to be held on March 8-10, 2009 in New York featuring more than 70 of the world’s elite scientists specializing in climate issues. Information HERE.