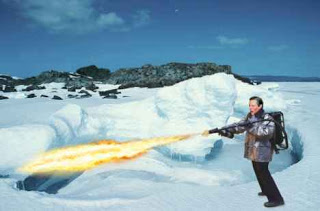 8 Mar 10 – “Almost all of the ice-covered regions of the Earth are melting — and seas are rising,” said Al Gore in an op-ed piece in the New York Times on February 27. Both parts of Gore’s statement are false. Never mind that Mr. Gore makes only passing reference to the IPCC’s fraudulent claims that the Himalayan glaciers will all melt by 2035. (“A flawed overestimate,” he explains.) Never mind that Mr. Gore dismisses the IPCC’s fraudulent claims that the oceans are rising precipitously. (“Partly inaccurate,” he huffs.) Never mind that Mr. Gore completely ignores the admission by the CRU’s disgraced former director Phil Jones that global temperatures have essentially remained unchanged for the past 15 years. I’ll let someone else dissect Gore’s lawyering comments, and concentrate on just the one sentence about melting ice, because neither part of that sentence is true. Contrary to Gore’s assertions, almost all of the ice-covered regions of the Earth are growing, not melting — and the seas are not rising. Let’s look at the facts. If you click on the words “are melting” in Gore’s article, you’re taken to a paper by Michael Zemp at the University of Zurich. Mr. Zemp begins his paper by warning that “glaciers around the globe continue to melt at high rates.” However, if you bother to actually read the paper, you learn that Zemp’s conclusion is based on measurements of “more than 80 glaciers.” Considering that the Himalayas boast more than 15,000 glaciers, a study of “more than 80 glaciers” hardly seems sufficient to warrant such a catastrophic pronouncement. Especially when you learn that of those 80 glaciers, several are growing.

In North America, Zemp also concedes, “some positive values were reported from the North Cascade Mountains and the Juneau Ice Field.” (“Displaying positive values” means growing.) Remember, we’re still coming out of the last ice age. Ice is supposed to melt as we come out of an ice age. The ice has been melting for 11,000 years. Why should today be any different? I’m guessing that most Canadians and Northern Europeans are very happy that the ice has been melting. Unfortunately, that millenniums-long melting trend now appears to be changing. No matter how assiduously Mr. Gore tries to ignore it, almost all of the ice-covered regions of the Earth are now gaining mass. (Or, displaying positive values, if you will.) For starters, let’s look at those Himalayan glaciers. In a great article, entitled “World misled over Himalayan glacier meltdown,” Jonathan Leake and Chris Hastings show that the IPCC’s fraudulent claims were based on “speculation” and “not supported by any formal research.”

As a matter of fact, many Himalayan glaciers are growing. In a defiant act of political incorrectness, some 230 glaciers in the western Himalayas – including Mount Everest, K2 and Nanga Parbat – are actually growing.
CLICK HERE TO READ THE REST!