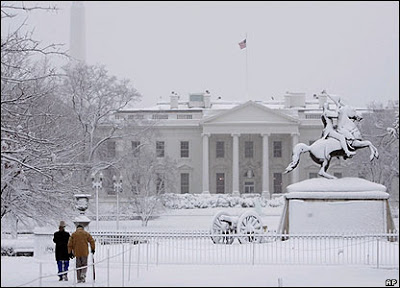 Washington D.C. and the Mid-Atlantic States have been hammered by another major snow storm, which exceeds the Dec. 19, 2009 storm that forced President Obama to curtail his time in Copenhagen. This is the first time since record keeping started that two storms of such magnitude have hit the region during one winter. Already some localities are reporting the largest snowfall ever recorded. To be sure, these events do not prove or disprove human caused global warming. But the momentum is now very much on the side of skeptical scientists who question these theories and President Obama should at least pull back from his awkward juxtapositions. Here’s what he said in The State of the Union: “I know there have been questions about whether we can afford such changes in a tough economy. I know that there are those who disagree with the overwhelming scientific evidence on climate change. But here’s the thing — even if you doubt the evidence, providing incentives for energy-efficiency and clean energy are the right thing to do for our future — because the nation that leads the clean energy economy will be the nation that leads the global economy. And America must be that nation.” On Saturday, during a gathering of the Democratic National Committee (DNC) in Washington D.C., Obama called this most recent storm “Snowmaggeddon” putting it on a par with what he experienced in Chicago. Looking ahead to the 2010 mid-term elections, Republicans should make more of an issue out of the “climategate” scandal involving leaked emails Climate Research Unit (CRU) of the University of East Anglia in the United Kingdom. It’s always possible to persuade the public on the basis of dire emergencies, which is why scientific evidence undermining alarmism deserves greater expression. The science the EPA has used to justify its finding that human emissions of carbon dioxide endanger public health and welfare should be subjected to vigorous criticism in the coming months. In the Federal Register, EPA states: “Warming of the climate system is unequivocal, as is now evident from observations of increases in global average air and ocean temperatures, widespread melting of snow and ice, and rising global average sea level. … Global mean surface temperature was higher during the last few decades of the 20th century than during any comparable period during the preceding four centuries.” Last year The Competitive Enterprise Institute (CEI) exposed how the EPA had suppressed a scientific study that concludes natural forces as opposed to human activity are largely responsible for temperature changes. Now is the time to attack the soft underbelly of unsubstantiated global warming alarmism. More snow is on the way tomorrow.
Source