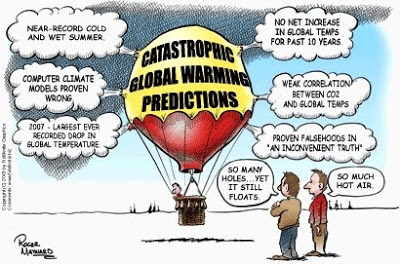 I think the BBC wanted to slip this one out quietly, but a Matt Drudge link put paid to that. The climate change correspondent of BBC News has admitted that global warming stopped in 1998 – and he reports that leading scientists believe that the earth’s cooling-off may last for decades.

“Whatever happened to global warming?” is the title of an article by Paul Hudson that represents a clear departure from the BBC’s fanatical espousal of climate change orthodoxy. The climate change campaigners will go nuts, particularly in the run-up to Copenhagen. So, I suspect, will devout believers inside the BBC. Hudson’s story was not placed very prominently by his colleagues – but a link right at the top of Drudge will have delivered at least a million page views, possibly many more. Hudson’s piece is a U-turn – not because he has joined the ranks of sceptics who reject the theory of man-made global warming, but because at last he has written a story about the well-established fact that the earth’s temperature has not risen since 1998, and reports seriously the theories of climatologists (themselves not sceptics) who believe that we are in for 30 years of cooling caused by the falling temperatures of the oceans.

According to research conducted by Professor Don Easterbrook from Western Washington University last November, the oceans and global temperatures are correlated. The oceans, he says, have a cycle in which they warm and cool cyclically. The most important one is the Pacific decadal oscillation (PDO). For much of the 1980s and 1990s, it was in a positive cycle, that means warmer than average. And observations have revealed that global temperatures were warm too. But in the last few years it has been losing its warmth and has recently started to cool down. These cycles in the past have lasted for nearly 30 years. So could global temperatures follow? The global cooling from 1945 to 1977 coincided with one of these cold Pacific cycles. Professor Easterbrook says: “The PDO cool mode has replaced the warm mode in the Pacific Ocean, virtually assuring us of about 30 years of global cooling.”

Hudson’s piece must have been a nightmare to write: talk about an inconvenient truth. All the caveats are in place, distancing him from hardline sceptics and giving plenty of space to the climate change orthodoxy. But, in fact, his scrupulous approach only makes matters worse for BBC executives who have swung the might of the corporation behind that orthodoxy, often producing what amounts to propaganda. The BBC now has serious questions to answer. It has used millions of pounds of licence-payers’ money to advance a simplistic point of view that is beginning to fall apart under scrutiny. Did it not foresee that this might happen? And, now that statistics are beginning to point in the other direction, is it prepared to give equal prominence to a debate about climate change that is both respectable and urgent?Source H/T to David, via email