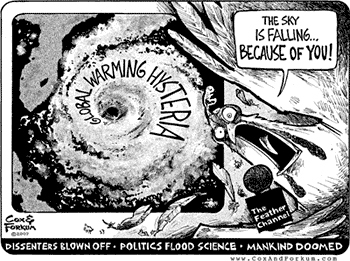 ONCE global warming was the “great moral challenge of our generation”. Or so claimed the Prime Minister. But suddenly it’s the great con that’s falling to bits around Kevin Rudd’s ears. In fact, so fast is global warming theory collapsing that in his flurry of recent speeches to outline his policies for the new decade, Rudd has barely mentioned his “moral challenge” at all. Take his long Australia Day reception speech on Sunday. Rudd talked of our ageing population and of building stuff, of taxes, hospitals and schools – but dared not say one word about the booga booga he used to claim could destroy our economy, Kakadu, the Great Barrier Reef and 750,000 coastal homes. What’s happened? Answer: in just the past few months has come a cascade of evidence that the global warming scare is based on often dodgy science and even outright fraud.