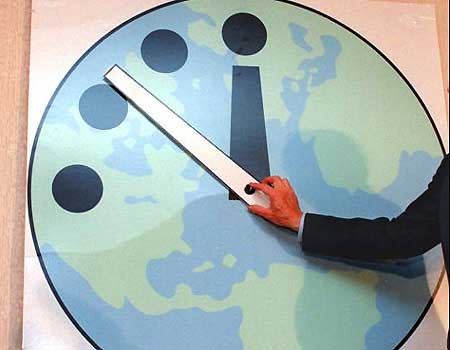 Largely unnoticed was the January 14 announcement by the Bulletin of Atomic Scientists that they had moved the hands of their imaginary Doomsday Clock back to six minutes from five minutes before the end of the world. Whoopee.

Created in 1945, the clock has been adjusted only eighteen times prior to the latest change. The Bulletin was created in 1945 by University of Chicago scientists who had helped develop the first atomic weapons in the Manhattan Project. The Clock was introduced in 1947 “to convey both the imagery of apocalypse” at midnight “and “the contemporary idiom of nuclear explosion” in a countdown to zero.”

The decisions about the Clock are made by the Bulletin’s Board of Directors in consultation with its Board of Sponsors, eighteen of whom are Nobel Prize Laureates. Considering the way elements of the Nobel Prize, particular its Peace Prize, have been totally politicized and degraded with awards to Al Gore, the UN Intergovernmental Panel on Climate Change, and most recently to Barack Obama, this latter citation is not encouraging.

Even less encouraging is the utter blindness of the decision in the face of Iran’s long quest to create nuclear weapons with which to threaten the entire Middle East, Israel in particular, Europe via long-range missiles, and America with a nuclear device.

The Bulletin further disgraces itself by combining the threat of nuclear weapons with the thoroughly discredited fraud of “global warming”, now called climate change. The Bulletin made it clear that the geniuses behind it believe that they are encouraged by the pledges of “industrialized and developing countries alike…to limit climate-changing gas emissions that could render our planet nearly uninhabitable.”

It just doesn’t get more stupid than that, given the recent UN Climate Conference in Copenhagen that thankfully achieved a big fat nothing and occurred during a blizzard that forced the President and other American delegates to flee before being snowed in or unable to land in the U.S., far across the Atlantic where yet another blizzard was in progress.

Coinciding with the Climate Conference was the revelation that the IPCC’s data was largely falsified by the handful of scientists in control of its reports of global warming doom and gloom. It was and is a Big Fat Lie.

So, the nuclear threat, a real one, and the global warming/climate change threat, an invented one, were addressed with the unalloyed optimism of the Bulletin scientists. They literally managed to ignore all the actual facts regarding both.

Perhaps most astonishing about the January 14 announcement was the “man crush” the Bulletin’s directors have on Barack Obama.

“A key to the new era of cooperation is a change in the U.S. government’s orientation toward international affairs brought about in part by the election of Obama.” The elections of Republican governors in Virginia and New Jersey, in addition to Tuesday’s election of a new, Republican Senator to represent Massachusetts suggests that even the voters of that most liberal State are not nearly as impressed with Obama. The plunging national approval ratings of the President’s performance further confirm this.

Among the comments included in the Bulletin’s announcement were those like Stephen Schneider who said “We can no longer prevent global warming…it is upon us.” No, it’s not. The planet is in a natural cooling cycle that began in 1998. Where Schneider has been since then is anyone’s guess. Perhaps on some other planet!

Others like Pervez Hoodboy of the physics department at a Pakistan university said, “We may be at a turning point, where major powers realize that nuclear weapons are useless for war-fighting or even for deterrence.” Tell that the Supreme Ayatollah of Iran.

What the Bulletin reveals is the way a PhD in a specific and narrow field of endeavor does not qualify a scientist to comment on anything other than his own sliver of expertise and, even then, you better get a second opinion.

Wishful thinking, sloppy indifference to obvious facts and events, and the conviction that their advanced degrees allow them to pontificate on the end of the world is the hallmark of the Bulletin’s Doomsday Clock.