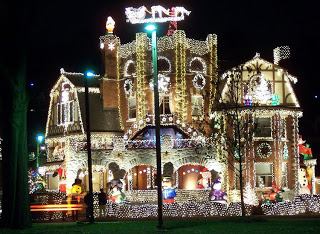 Environmentalists critical of electrified America must have mixed emotions this time of the year. It may be the season of good cheer and goodwill toward all, but it is also the time of the most conspicuous of energy consumption. America the Beautiful is at her best in December when billions of tiny stringed light bulbs turn the mundane or darkness itself into magnificent beauty and celebration. Holiday lighting is a great social offering—a positive externality in the jargon of economics—given by many to all.

While energy doomsayers such as Paul Ehrlich have railed against “garish commercial Christmas displays,” today’s headline grabbers (Grist, Climate Progress, where are you?) have not engaged a public debate over the issue. [At least one enviro blogger has, however, as have SANTA (Sustainability Action Network and Toy Alliance) and the Energy Justice Network)]. Yet holiday lighting is a glaring exception to their goal of reducing discretionary energy usage to help save the world. If holiday energy guzzling is forgiven, why not excuse outdoor heating and cooling, one-switch centralized lighting, and instant-on appliances that “leak” electricity, not to mention SUVs? Prancing around to turn on individual lights or waiting for the paper copier to warm up wastes the scarcest and one truly depleting resource: a person’s time. Surely extra energy use for comfort and convenience has priority over purely celebratory uses of energy. What about the holiday humbug that celebratory electricity depletes future fossil-fuel supplies, fouls the air, and destabilizes the climate? Good tidings abound! World oil reserves are over 20 times greater now than they were when record-keeping began in the 1940s; world gas reserves are almost four times greater than they were in the 1960s; world coal reserves have risen fourfold since 1950. Political events can drive supply down and prices up, but the raw mineral resource base is prolific—and expanding in economic terms thanks to an inexhaustible supply of human ingenuity and exploratory capital. Record energy consumption has been accompanied by improving air quality. Urban air quality is significantly better today than in the 1970s in the United States. The U.S. Environmental Protection Agency reported that air emissions of the criteria pollutants declined by 60 percent from 1970, while energy usage increased by a third. Further air emission reductions are expected, but it will not be accomplished by forcing higher prices or inconvenience levied on consumers. It will be accomplished with market incentives, technological improvement, and regulation based on sound science, not alarmism. Should good citizens think twice about holiday lighting given global warming and other suspected climate change from increasing atmospheric concentrations of carbon dioxide? Hardly. A moderately warmer, wetter world, whether natural or anthropogenic, such as experienced in the 20th century, is a better world. Carbon dioxide from the combustion of fossil fuels “greens” the biosphere through the well-documented carbon fertilization effect. But most importantly, the wealth created from affordable, plentiful energy provides the primary means for societies to improve the environment. In the final analysis, wealth is environmental health, which explains why increasing energy usage and environmental improvement have gone hand in hand in the Western world. There is much to be thankful for this holiday season with our energy economy. But thoughts about the less fortunate should be with us too. An estimated 1.5 billion people do not have electricity for lighting, heating, cooling, cooking, or water purification. A Christmas tree for us is likely to be firewood for those living in energy poverty. For these people, there could be no greater holiday gift than affordable electricity itself, explaining why the developing world has flatly rejected proposals from environmental elites to forsake future energy usage in the quixotic quest to “stabilize climate.” Energy consumption is good—for comfort, convenience, and even celebration. May one and all in good conscience enliven this holiday season with lights aplenty. With conventional fuels and energy technologies rapidly improving, Americans can look forward to even more energetic celebrations and shared goodwill in the holidays ahead.Source by Robert Bradley Junior

One thought on “Three Cheers for Holiday Lights!”