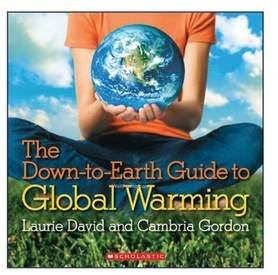 By Joe Dejka, World-Herald
Millard Public Schools will stop using a children’s book about global warming — but only until the district can obtain copies with a factual error corrected.A review committee, convened after parents complained, concluded that author Laurie David’s book, “The Down-to-Earth Guide to Global Warming,” contained “a major factual error” in a graphic about rising temperatures and carbon dioxide levels.Mark Feldhausen, associate superintendent for educational services, this week sent a letter to parents who complained, including the wife of U.S. Rep. Lee Terry of Nebraska, outlining the committee’s findings.”Although the authors have pledged to correct the graph in subsequent editions, the committee recommends that this correction be made to all MPS-owned texts before using it with students in the future,” Feldhausen wrote.

Corrected versions will continue to be used in Millard’s sixth-grade language arts curriculum, he wrote. However, the district will cease to use a companion video about global warming, narrated by actor Leonardo DiCaprio, he wrote.

The committee found the video “without merit” and recommended that it not be used.

Robyn Terry, the congressman’s wife, had described the video as a “political commercial.”Lee and Robyn Terry released a statement saying they were pleased with the decision and “impressed” by the district’s handling of the case.

“We are pleased with their decision not to use the politically natured global warming video as a classroom instruction tool and that they have set a standard that information-based texts must be factually correct to be put in front of our children,” they wrote.

This past weekend I was horrified to learn that my little sister was shown the “Day After Tomorrow” as part of her geology class. Scarier, for me, is that it happened at an University level. Shouldn’t students be horrified that they’re paying hundreds of dollars per credit to be fed environmental propaganda?

My story is one of many that we’ve encountered at Not Evil Just Wrong.

You knew our public school children were being indoctrinated in anti-capitalist dogma being passed off as “science,” right? Well, in case you didn’t, they are. For years public schools around the world have been showing Al Gore’s propaganda film “An Inconvenient Truth” and exposing impressionable children with other misleading information in order to fool them into believing evil capitalists, along with their SUVs and energy sources, are destroying our fragile planet. South Dakota Representative Don Kopp of District 35 is ready to do something about that. The Rapid City Journal reports he has pre-filed legislation for the upcoming legislative session which would require both sides of the debate to be presented in the classroom. Are the odds against the bill? Of course. Entrenched ignorance–especially when that ignorance is entrenched in elitist circles–is very difficult to uproot. Is it worth making the effort? Of course. We owe it to the children of our society to ensure they are not mindlessly indoctrinated by the “flavor of the day” liberal pap, especially when it’s passed off as “science.” Expect a lot of resistance from liberals in the education establishment and elsewhere. Even they understand deep down that their religion of anthropogenic global warming is a house of cards built on a tiny bit of genuine science and a great deal of supposition and conjecture. What’s more, there is a gargantuan amount of evidence against AGW. The vast majority of scientific and historical information points to natural and cyclic climate change which goes back thousands of years. We know that 1000 years ago, Greenland was warm enough for Vikings to colonize this now-cold area. The Vikings even grew vineyards, which is something you can’t do in cool climates, much less frigid ones. The Peruvian ice caps were also much warmer in the past, as was medieval Spain, Iceland, Sweden, Austria, Canada, South Africa, Spain, Pakistan, Japan, China, New Zealand, and more. Warmer periods than today extend even back to the Greek and Roman eras. Data shows that to solar activity (duh) has great influence over global temperatures on earth, and that temperature drives CO2 buildup, not the other way around. We even see other planets around our solar system such as Mars and Jupiter warming up–yet there are no SUVs or coal power plants there. Somehow we are supposed to believe that interplanetary global warming is natural while terrestrial global warming has been “settled” as definitely man-made. Sure. In fact, claims of “consensus” and “settled science” are themselves pure propaganda. A great number of scientific organizations such as the Polish Academy of Sciences and others are speaking out and telling the truth about this unscientific fraud. Over 31,000 scientists have signed one petition alone, disagreeing with the hypothesis of anthrop0genic global warming. Finally, ClimateGate–the exposure of emails, documents and computer code from the Climate Research Unit in England–as exposed the face of global warming fraud. This “research” center which provides global warming analysis for the UN Intergovernmental Panel on Climate Change (IPCC) and others has been revealed doing “tricks” with data and “fudging” their computer models, destroying raw data and trying to hide their real information from the public. And they are not the only agency which has been up to deception and trickery. This sordid scandal reveals that science has gone to bed with advocacy, and the result is a massive hoax being perpetrated on the people to rob them of their prosperity and their liberty. It is quite clear, when one knows the players involved in pushing this nonsense, that it is nothing more than anti-capitalist propaganda intended to separate the common people from their freedom. A thinking people who want to remain free do not unquestioningly accept whatever they are told simply because a so-called professional tells them it is so. Scientists, educators and government officials should maintain a high degree of integrity, but the reality is that they are susceptible to the same biases and temptations to tell a self-serving whopper as the rest of us. Perhaps you are okay with being separated from your freedom and your heard-earned waged, but I am not. Perhaps you are okay with having your children indoctrinated with an unscientific hoax that threatens the integrity of the U.S. Constitution, our sovereignty, and our very way of life…but I am not. I’m grateful that Rep. Kopp has the courage to separate himself from the herd, to disregard juvenile peer pressure and insist on–if not full honesty about this fraud–at least equal time for the facts.Source 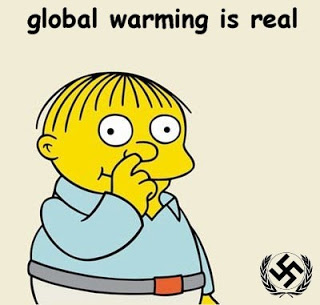 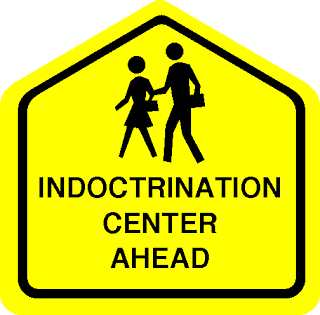 Scientists see no temperature increase (on average) in the oceans or on the surface of the Earth over the last decade. That hasn’t stopped an activist group from infiltrating high schools with the panicky message that we are on the verge of a “planetary emergency” due to global warming. These alarmists are the recently formed Alliance for Climate Education, an Oakland, Calif., nonprofit created by wealthy wind energy entrepreneur Michael Haas. The organization has targeted five metropolitan areas and now is opening a Washington office. Haas, who donated $24,600 to President Obama’s campaign and victory funds last year, stands to reap millions of dollars in government subsidies that climate change-driven energy policies would bring. Meanwhile the teenagers targeted by ACE are treated to hip presentations with slick animation to propagate the idea that they and everyone in their spheres of influence must modify their behaviors so as to stop global warming. This is achieved by cutbacks in their energy use, which ACE believes produces too many greenhouse gases (from fossil fuel combustion like coal and oil) that warm the planet. The mostly undiscerning kids love it. ACE, which lobbies school boards and administrators to get invited to give presentations, delivers its propaganda to hundreds of students at a time in assemblies. Getting out of class to watch an amusing talk highlighted by flatulent animated cows (to emphasize their methane emissions, another greenhouse gas) is good for plenty of laughs and scores big with the teens. But ACE’s talks are infected with falsehoods, like telling the students they’ve “lived through the 10 hottest years on record” (1934 was the hottest) and that greenhouse gas emissions are cranking up the global thermostat “way too high”. Talk about one-sided hyperbole to shape impressionable minds. Meanwhile, scientific studies like those that reveal we may be entering a prolonged cooling period, due to an inactive sun, are left out of climate discussion. ACE has also targeted the San Francisco, Chicago, Los Angeles, Houston and Boston areas, and aims to reach 140,000 students by the end of this year. Its goal is simple: Get students active in the name of dubious (at best) global warming alarmism, demonize fossil fuels and push solutions such as alternative energy — like wind. Unfortunately, many teachers and administrators are all too willing to let this biased bunch extract students from classes and force-feed them its pap. Parents should be aware that their kids might be the targets of this political recruitment effort during valuable class time. Paul Chesser is a special correspondent for The Heartland Institute.Source via Washington Examiner