Looks like your charade is coming to an end, Mr. Gore. The people aren’t falling for your climate fairy tales any longer. As hundreds of folks showed up to chant “Al Gore’s a liar!” and “Change the system, not your lightbulbs!”, the science behind global warming continues to collapse and your fraud is being exposed. Hallelujah! 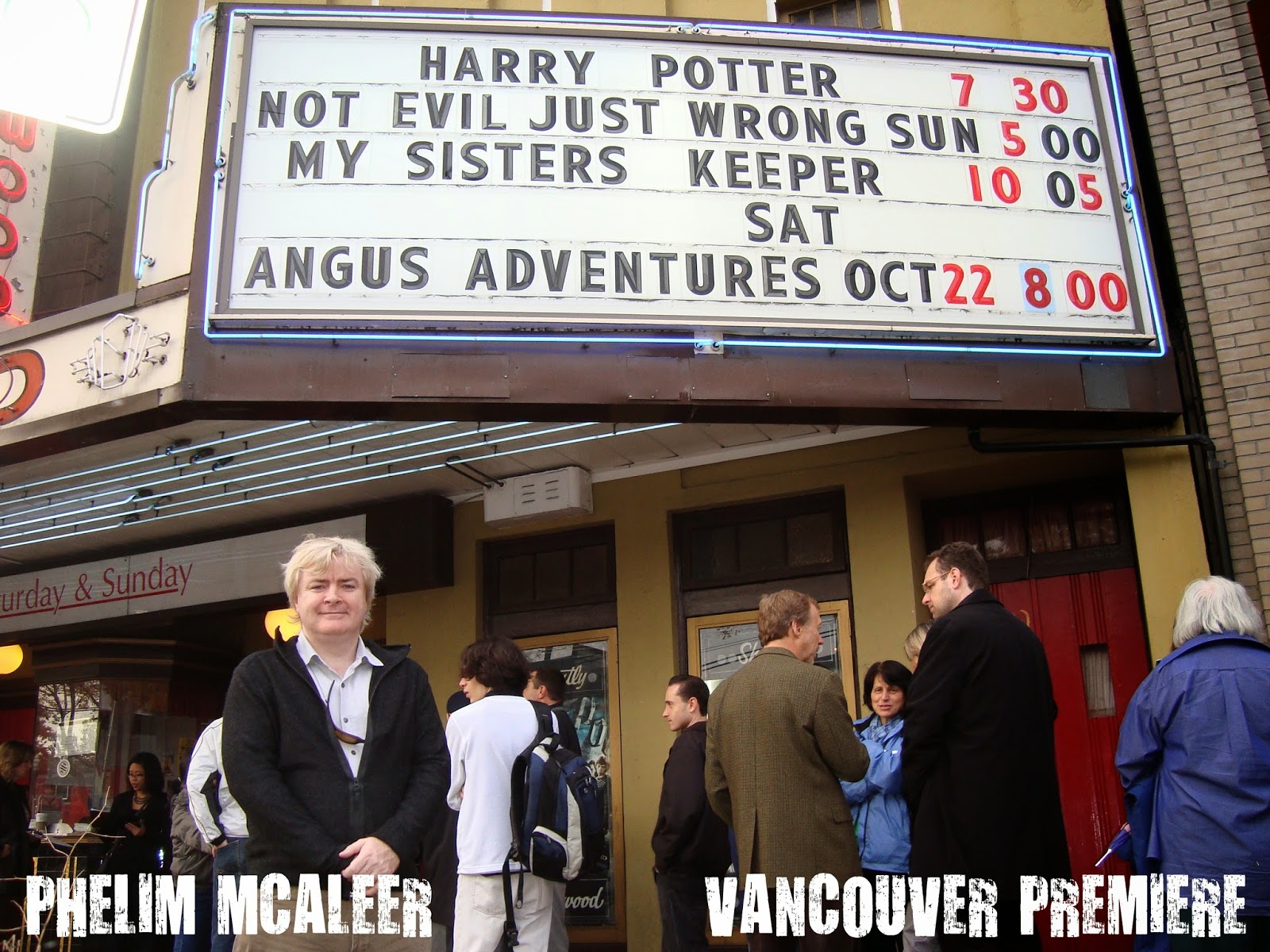 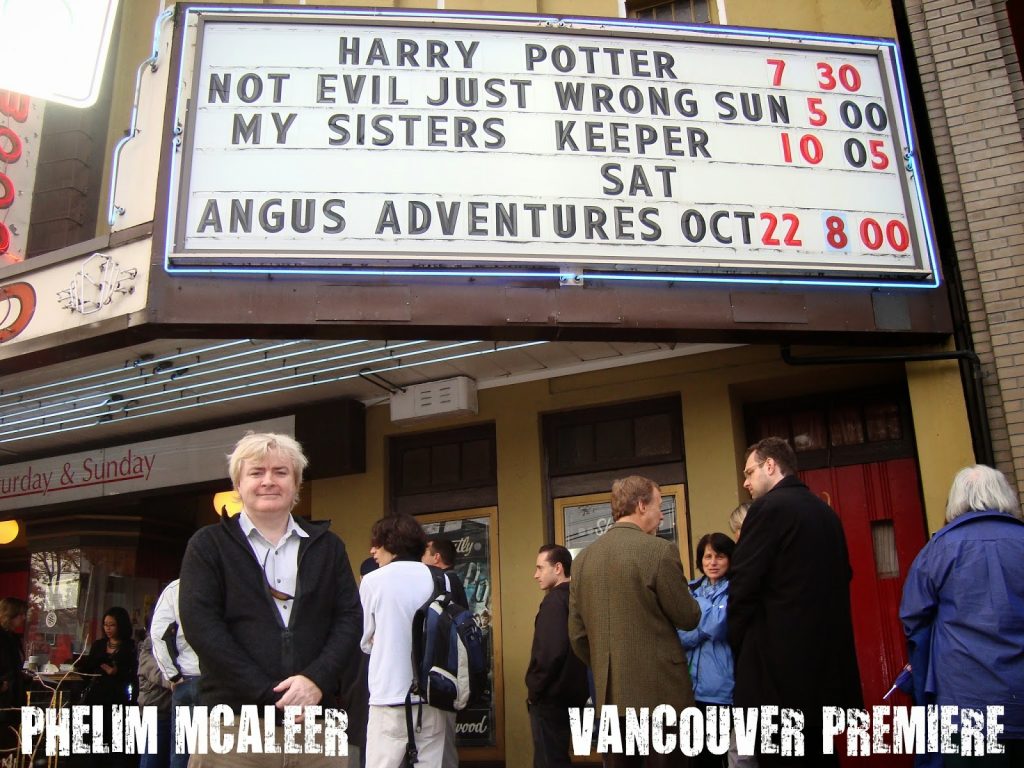 The world premiere of the groundbreaking documentary Not Evil Just Wrong took place last night at 5:00 PM PST. People from all walks of life in 27 countries participated in their own Cinematic Tea Party in cinemas, churches, libraries, community centers, and homes. Human beings standing up for human beings, all celebrating life, liberty, and freedom. Over 3,000 screenings took place right here in North America alone. (CLICK IMAGES FOR FULL SIZE) 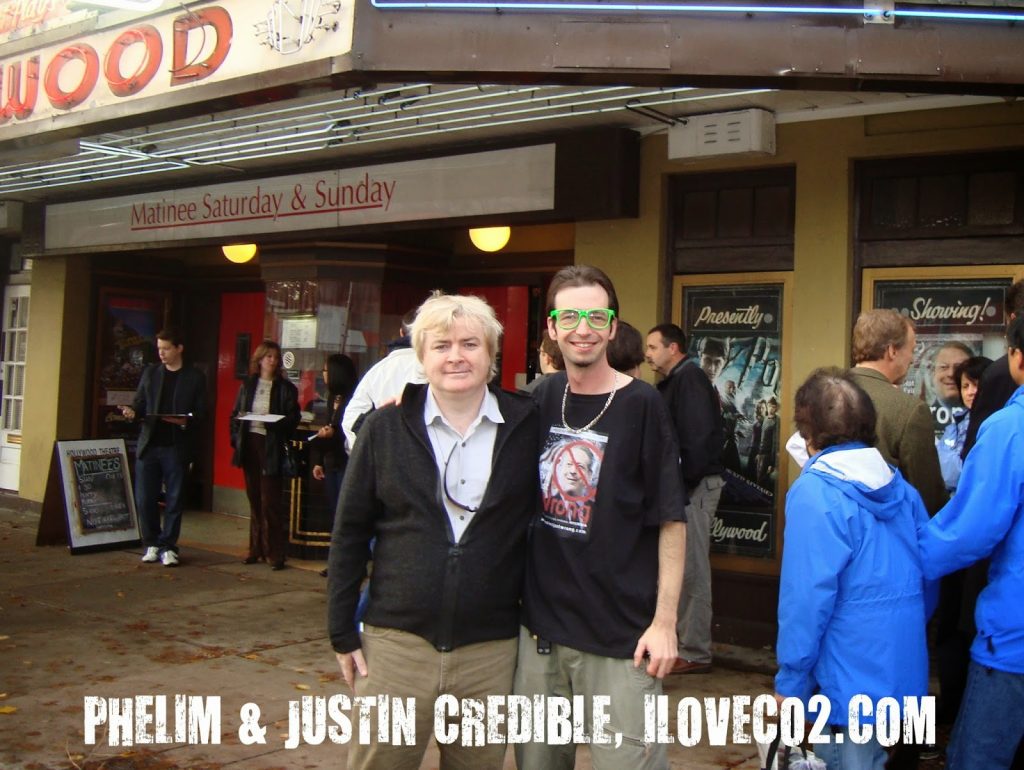 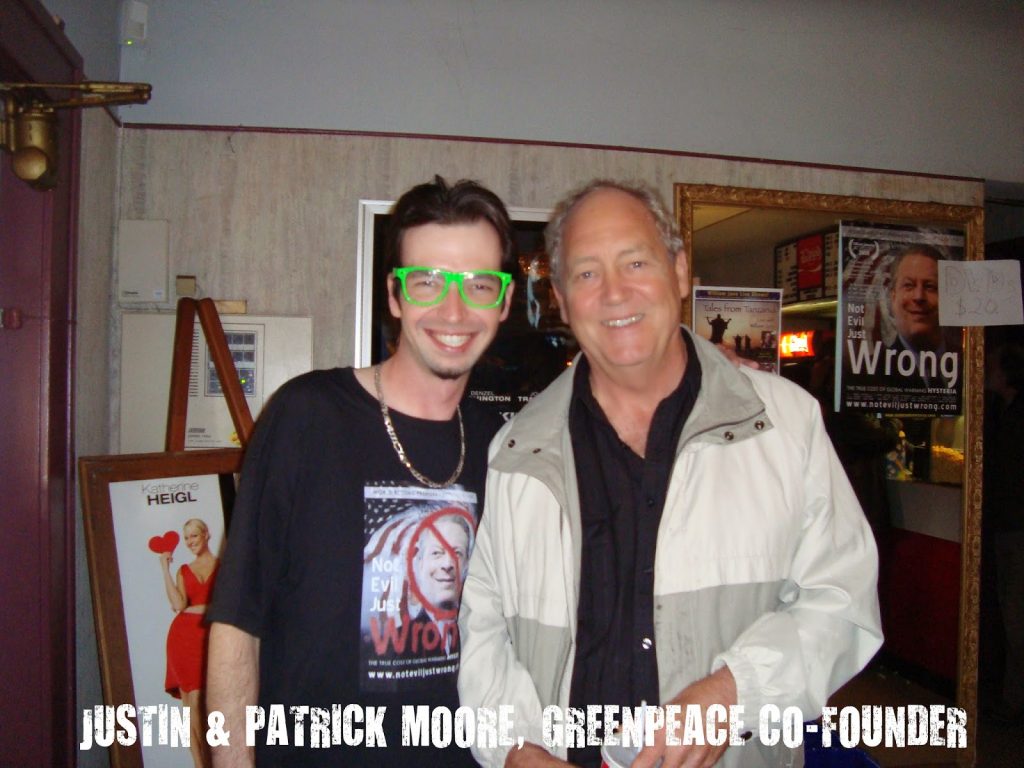 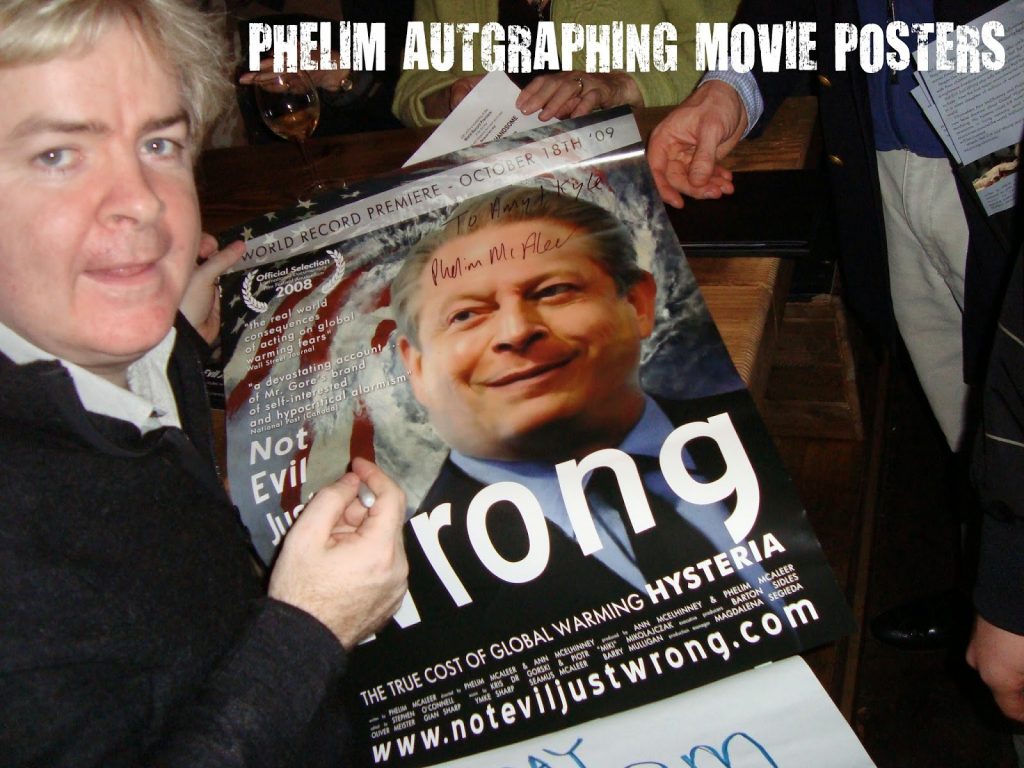 As all regular followers of this site know by now, I have been tirelessly working to help promote the Not Evil message and get the good word out to as many folks as possible. As well as plugging the film at every opportunity and helping to organize the Vancouver public premiere, I’ve also been doing my part offline by encouraging friends and family to get involved. I’m happy to report that on Sunday October 18 2009, the world did indeed change. For the better. 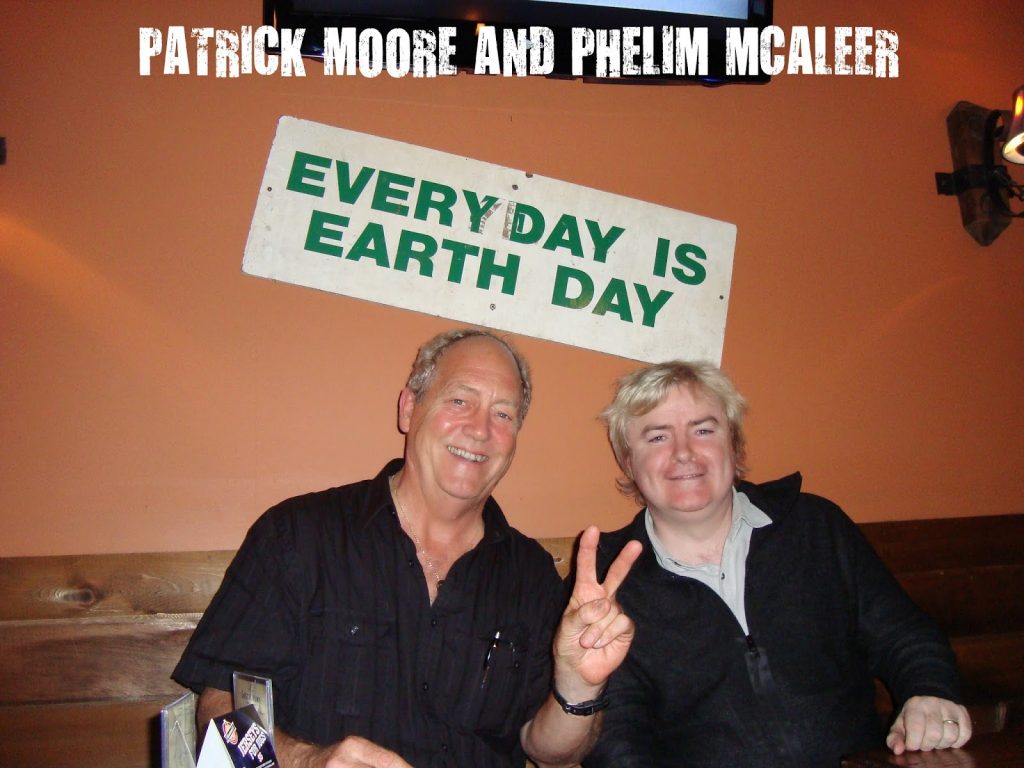 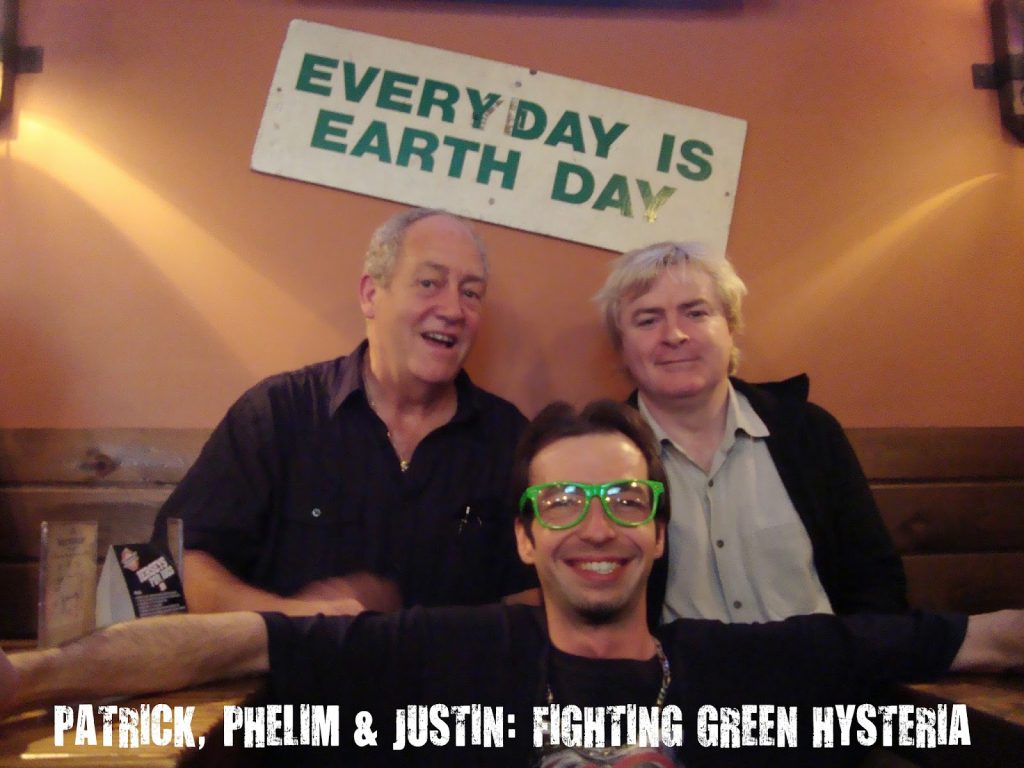 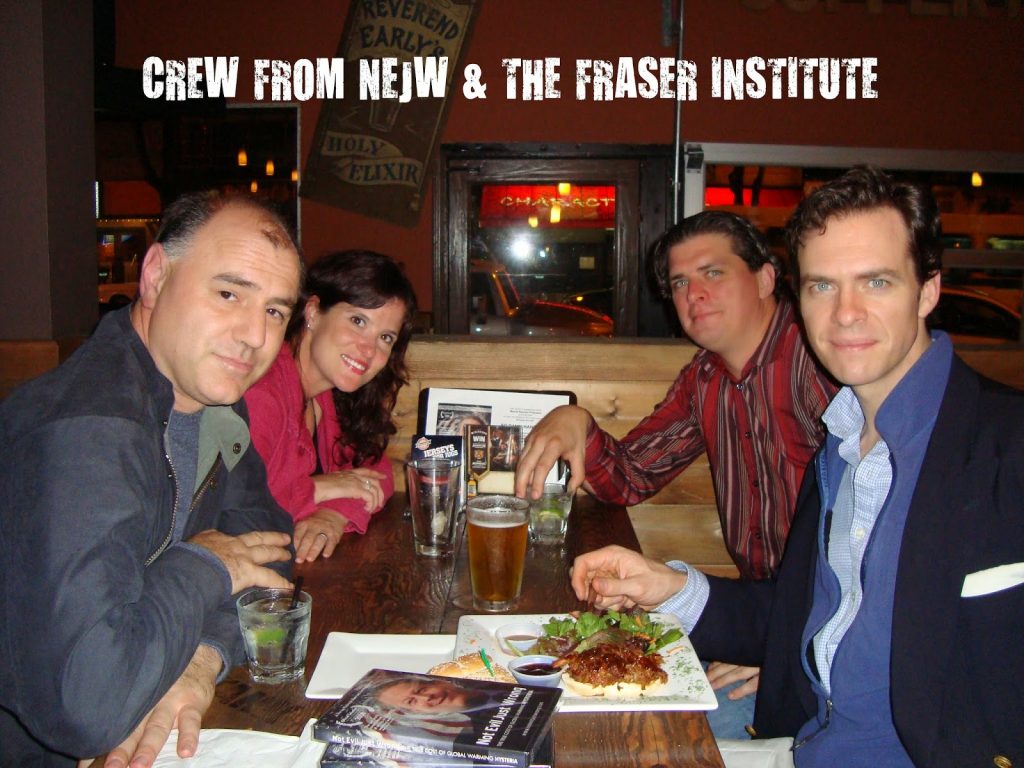 Here at the Vancouver premiere which took place at the Hollywood Theatre, we had a lineup down the block half an hour before showtime. An excited, diverse crowd, and even just some passerby wondering why Al Gore’s portrait on the movie poster resembles the Joker and therefore became curious enough to stand in line and check it out. At five o’clock the lights went down and history was being made worldwide simultaneously.

The film played for 90 minutes, and as the credits rolled it was easy to determine the reaction from the crowd. People who have been waiting a long time for this night were very pleased with the final product, and many other people, perhaps some who had not even heard of the film until yesterday, were suddenly re-examining their way of thinking. I swear, you could almost hear the sound of opening minds echoing throughout the building.

This was a very special premiere for Vancouverites. Some lucky moviegoers got their chance to speak with Director/Producer Phelim McAleer, Executive Producer Barton Sidles, and our guest of honour Patrick Moore, founding member of Greenpeace, both at the cinema and at a special meet ‘n greet afterwards. Phelim was busy signing copies of the DVD for guests, and even penned his name on a movie poster for a little girl who is obviously not fretting over mythical dying polar bears or suffering from unfounded eco-anxiety. Which is a good thing, since there are 5 times as many polar bears today as there were half a century ago, and the planet is certainly not warming.

Thank you Phelim, Ann, Barton, and Patrick for all your efforts. You’ve managed to bring much-needed awareness to the issue of environmental extremism and you’ve exposed the true human cost of global warming hysteria. The momentum you’ve started is only just beginning. And thank you to all the people who participated by attending a screening or watching from home. Together, we stood up for science. We stood up for humanity.

Also a very special thanks to Vanessa Schneider and the crew at the Fraser Institute for all your hard work and support for the Vancouver screening, and all the other Canadian premieres. We couldn’t have pulled off this magical night without you.

UPDATE: Just three weeks after the premiere, Phelim graced us with his presence once again.

Those of you who can’t make it to one of the screenings can participate in the Cinematic Tea Party right from your computer! Watch the live stream of the film premiere right here!

CLICK HERE to buy the DVD and support this site! 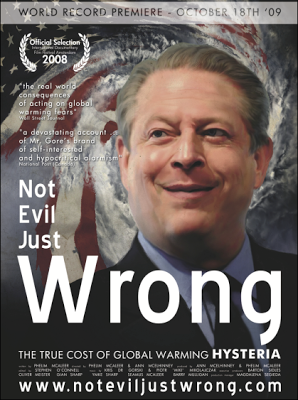 Great news for all our readers here in Vancouver, BC!

Global warming alarmists want everyone to believe that humans are killing the planet. But Not Evil Just Wrong proves that the only threats to America (and the rest of the world) are the flawed science and sky-is-falling rhetoric of Al Gore and his allies in environmental extremism.

The planet is cooling, not warming. Extreme weather is lower now than ever before. Carbon dioxide is greening the planet, not killing it. Environmental campaigns are threatening the world’s poorest people, and threatening our own freedoms and liberty.

We’ve managed to arrange an exclusive screening of this important film at Vancouver’s famous Hollywood Theatre for the premiere night! This theatre is a stones throw away from our headquarters in the heart of Vancouver’s Kitsilano neighbourhood and only a few minutes away from the University of British Columbia.

Thanks to generous help from the Fraser Institute and the film’s producers, we will be presenting the feature documentary on the big screen at exactly 5PM on October 18th.

Hundreds of thousands of people all around the world will be watching the film in community centers, churches, cinemas, universities, and in their homes, all pressing play on their DVD players at the same moment on October 18th. We will be attempting to break a world record for the largest simultaneous film premiere in history!

UPDATE: Greenpeace co-founder Patrick Moore (who appears in the film and is now very critical of Greenpeace) will be attending this premiere in Vancouver, along with producers Phelim McAleer and Barton Sidles!

Join the fightback against global warming hysteria and environmental extremism. Please join us at the screening! If you have any questions simply contact us.

If you aren’t in Vancouver and cannot make it to the theatre, you can host your own premiere with friends and family by clicking here. Here’s the trailer: 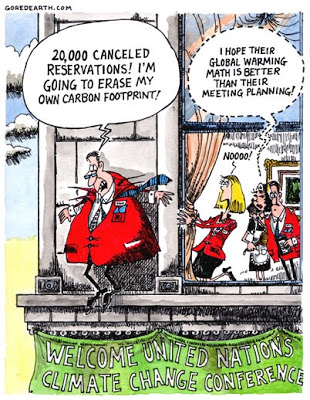 Over 20,000 hotel reservations have already been canceled for the upcoming Climate-Scamapalooza conference in Copenhagen this November! This news comes at a time when the vast majority of the public have become more skeptical of global warming fears, joining the tens of thousands of worldwide scientists who have spoken out against prophet profiteer Al Gore’s religion while proving over and over that increased CO2 in the biosphere has huge benefits for all life, and of course the nagging fact that the Earth has still failed to actually warm up. In fact, it’s still cooling and is estimated to continue cooling for the next 20-30 years. Well well well, sanity just might prevail in the face of all these facts.

Thomas Færgeman, the director of environmental think tank Concito, was concerned the government “had lost confidence that it could broker a ground-breaking climate and had therefore lowered expectations as to how many participants were expected”. Aww what a shame.

The timing couldn’t be better, as the upcoming October release of Not Evil Just Wrong will also make an impact on the UN’s agendas at Copenhagen. Not to mention an impact on Greenpeace’s propaganda and their coffers.

This site has received over 40,000 unique visitors and half a million page hits…in just a few months. We would like to thank all our readers and supporters for spreading the word, all the scientists and editors submitting stories, and all the websites listed on our links page for top-notch content.

In celebration, I’ve redesigned the look and feel of the site. As well, I’ll be launching new features over time, including a new section just for YOU, the readers, to express your opinions. I know there is a lot of frustration out there relating to this giant scam known as man-made climate change, and a lot of you need to vent. Especially after the disaster in Congress a couple weeks ago. I want your voice to be heard.

We’ll be calling the new section “You ♥ CO2” and will be publishing your own articles and stories as we receive them. (May be edited for clarity, space, and spelling. Must be relevant to the direction and views of this site. Greenwashed treehuggers look elsewhere, you’ve already got enough sites to push your ideology on people)

In the meantime, you may email your submissions to info[at]ilovecarbondioxide.com
(Replace “[at]” with “@”)

David Suzuki and his greenwashed sheep should take note: We’re fighting back.

As of today, I’ve launched DeSmog.me, a very simple one-stop climate news shop for all the latest headlines and links around the web. Think of it as a giant RSS feed of all your favourite skeptic sites, so you no longer have to log onto each site one by one to check out today’s news.

I hope you find the site useful and I hope you especially like the name of it! I’d pay money to see the reaction from our counterparts at DeSmogBlog once they stumble across it! And here’s the best part: I run these websites from a location here in Vancouver that is only a few blocks away from those irrational hippies at DeSmogBlog.

I snatched up the domain name from the increasingly popular dot-ME registry and have been holding onto it for a while, but now I’m making it public. As The Daily Bayonet would say, “hippie heads are going to explode.”

I have also set the search bar to search ALL the websites listed in the sidebar. I hope this setup is helpful to many of you who look for info on climate topics, as you can easily search dozens of websites instantly. It should make things very easy for researchers and also just the curious!

The choice of live feeds on the main part of the page were chosen simply because they are sites which are updated regularly, therefore each time you visit Desmog.me it will be full of the latest breaking news and views. I will add a feed to those who request, and their content is relevant to the climate change hoax. (Your site has to allow RSS feeds, of course)

The site is slowly being developed to include more goodies soon, so stay tuned. In the meantime, if you’d like your realist website, blog, product, or article to be featured on the top “featured link” please send an email to justin [at] desmog.me and I’d be happy to plug you.

We need to build an army of online volunteers who will spread the word about the upcoming release of the feature film Not Evil Just Wrong. How you can help:

Plus, of course, start recruiting other volunteers to do the same! Let’s get the word out to EVERYONE and begin a mass viral marketing push! After yesterday’s disaster in the US congress and the upcoming climate conference in Copenhagen, we need to do everything we can to get Not Evil Just Wrong into as many cinemas, schools, and homes as humanly possible!

Let’s make history. The majority of the population no longer believes in Al Gore’s science fiction and are finally catching on to the greatest scientific scam in history. There is no question that is exactly why Obama and his administration are so frantically trying to cram through the gigantic cap-and-tax bill now, before it’s too late. Liberty or tyranny? It’s our choice. Third world development or poverty? It’s our choice. Make the moral choice. Stand up for science, freedom, and your rights.

Click these two links to view rock-solid science VS environmentalist ideologies and share it with everyone you know!

We must not allow them to pull the wool over our eyes.